The Peak District is split into two distinct areas - white and dark. The first weekend linear walk I did several years earlier was along the Limestone Way in the White Peak area. It was lovely to return to Derbyshire in order to cover some of the best walking routes across the more northerly and wilder Dark Peak.

The first two days of the route were arguably a little bit less than linear; the distance between start and finish each day as the crow flies being much less than the miles under foot. We went from Hathersage along Stanage Edge then onto Castleton on one day and then around the horseshoe at the end of the Edale valley the next day. The third day followed the first section of the Pennine Way, albeit starting with the old route over Kinder Scout and across the moor rather than the new route up Jacob’s Ladder.

To get to and from the walk, we drove to Glossop to stay the night in the Travelodge. In the morning, we dropped a car a couple of miles away in Hadfield station car park, before driving another car to the start of the walk at Hathersage.

The drive from Hadfield to Hathersage was a marvellous way to start the first day, as it goes over the wilds of Snake Pass and down to Ladybower Reservoir.

Saturday - Hathersage to Castleton via Stanage Edge and Win Hill 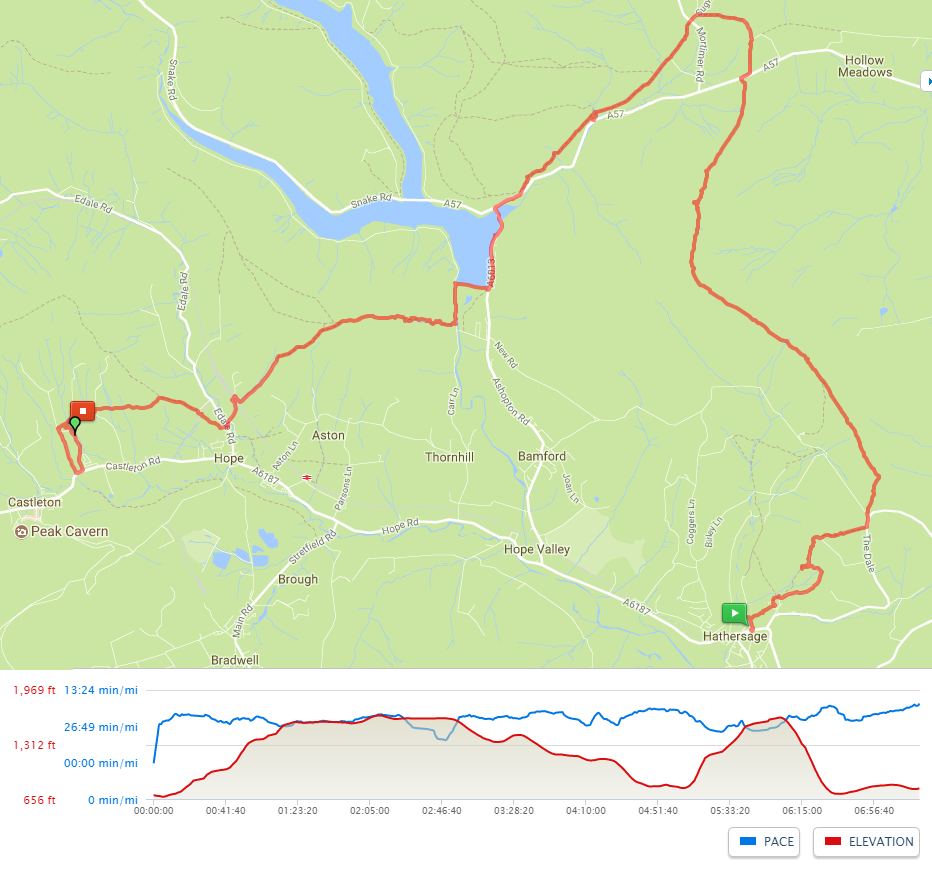 Starting in the centre of Hathersage, a path runs perpendicular to the High Street and heads towards the church. From here, there is a confusing multitude of paths and lanes all heading in the same general direction. Although barely out of town, we found the easiest way to navigate these was to maintain a compass bearing. At one point, we reached an un-signposted farmyard gate. Passing by, after less than a quarter mile, the path turned left and started to descend. We rechecked our maps and worked out that, although it looked unpromising, the path did actually go through the farmyard (presumably the landowner doesn’t like ramblers).

After continuing to rise, the path came out onto a lane in open fields from which a stile took us left and onto the crest of a rise from where we could see a carpark at the foot of Stanage Edge. A short walk upwards brought us to the top of the edge giving lovely views west down the Hope Valley.

We walked along the ridge past Robin Hood’s Cave (which can be reached via a short scramble down a path set into the cliff-face) and kept heading north, stopping in the lee of some rocks for lunch before continuing until the path dropped off the edge and hit the A57. We were frequently accompanied by curlews along the second half of this stretch, presumably trying to distract us from nesting sites somewhere on the moor.

In order to avoid a kilometre of road walking, we crossed over the A57 to continue north for a half mile before turning along a path west, parallel to the road. This path eventually meets the A57 again but, rather than cross the road immediately, it rises to run parallel and above it. After another few hundred metres, at the Ladybower Inn, we joined the road and turned left at the T-junction to walk along the pavement until we reached the dam at the south of the reservoir. We crossed along the top of the dam before turning left onto a bridleway. Before long, we started to see paths leading to the right. We ignored the first couple until we came to the foot of some steps, signposted “Win Hill”.

At this point, we were ten miles into the walk. So it was “pleasing” to discover that the climb up Win Hill is somewhat stiff. After a bit of huffing and puffing, the path rises above the woodland. From the top, there is a panoramic view over the Peaks. We could see Stanage Edge behind us and the Great Ridge ahead of us, behind which was Kinder Scout - i.e. the next two day’s walking.

We dropped quickly off Win Hill down to a railway line and then into farmland where it was a short walk to the YHA at Losehill Hall. Unfortunately, we missed the gate at the back of the hall and had to loop all the way around the estate to the main entrance - an unwelcome extra half mile. The YHA was comfortable, however, and there were plenty of places to eat nearby in Castleton.

Sunday - Castleton to Edale via the Great Ridge and Rushup Edge 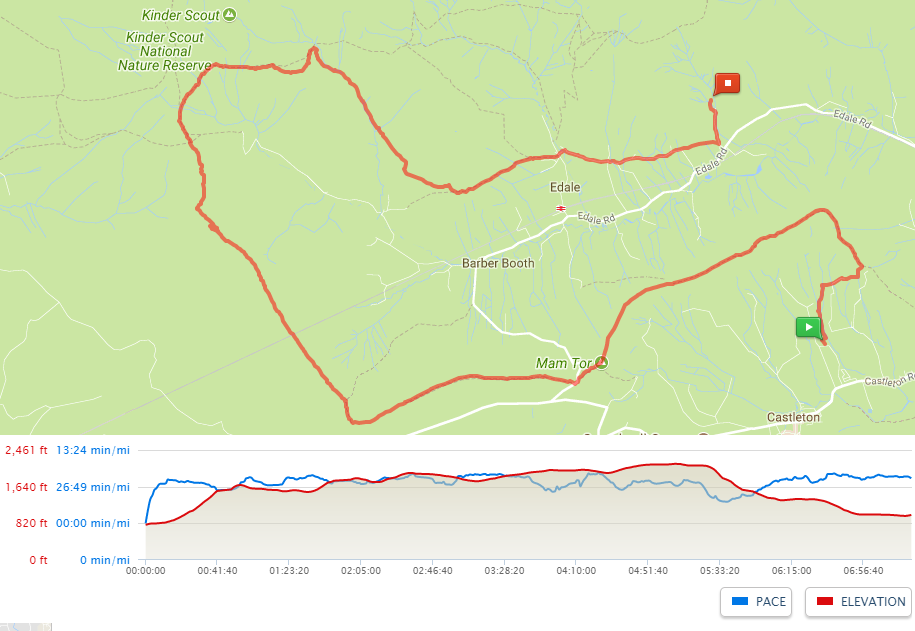 A classic Derbyshire walk - the horseshoe around the Vale of Edale offers consistently beautiful views throughout.

Leaving the YHA, we quickly climbed to the top of Lose Hill. From here, the Great Ridge undulates west. It’s a popular route and we passed lots of walkers as we rolled down to Hollins Cross and then up to the top of Mam Tor. We paused briefly here, to see if we could get into the background of the recording being taken by a TV crew, before dropping down to the road, over which we crossed to start the short climb up onto Rushup Edge. The route here starts to turn into moorland. Turning right after a mile and a half, we picked up the path heading to Brown Knoll. Due to erosion, this path is a pavement made of stone recovered from an old mill. It makes for fast walking, and is preferable to wading through a bog, but was quite hard on the feet.

We stopped to eat our sandwiches sat around the marker at the top of Brown Knoll. The route then dropped down a little to take us around the top of Jacob’s Ladder, passing along no more than a couple of hundred metres of the Pennine Way, before turning right to climb up to the highest point of the walk at Crowden Tower.

The weather was beginning to get a little wet at this point, so we turned right into Crowden Clough, a sharp descent with some scrambling. We very quickly came out of the rain and down to the valley floor to pick up the Pennine Way again. It was a short walk from here to Edale, where we stopped for an early dinner in the The Old Nags Head before walking the last mile and a half to Edale youth hostel, which is tucked into the edge of the hill (and not especially near Edale).

Monday - Edale to Hadfield along the Pennine Way 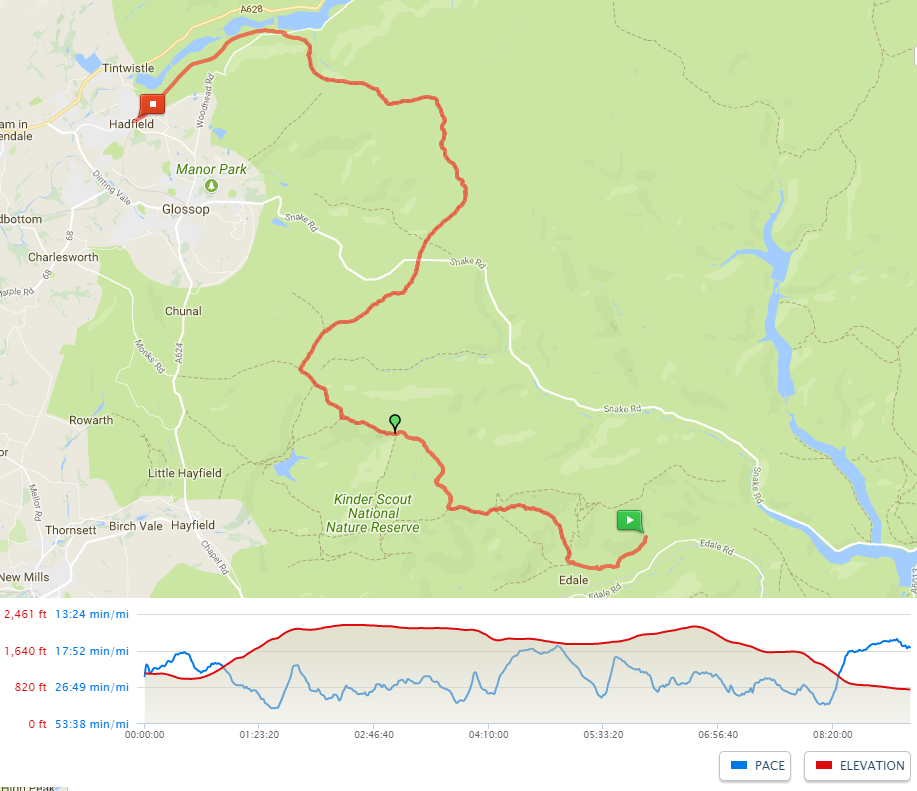 We could have walked the official Pennine Way day-1 route going up Jacob’s Ladder but decided instead to go along the original path across the very top of Kinder Scout. I think that, if we did the walk again, we might make a different choice. The few miles of this walk across Kinder Scout moor were among the hardest I’ve done.

Leaving the youth hostel, we went back to Edale and then turned north to scamble up Grindsbrook Clough. This was a great way to start the day as the path winds up alongside the stream, getting progressively steeper until it pops out onto the moorland that forms the top of Kinder Scout.

It was misty and raining at the top and we walked back towards Crowden Tower, before turning right into the moorland proper. At this point, with low visibility, we had to rely on a compass bearing, heading NNW towards Kinder Downfall. There is scant evidence of a path over the moor and there are frequent deep drops in the peat bogs, where we had to climb down several feet before trying to cross wide expanses of soft peat, using whatever clumps of grass were available as footholds. It wasn’t long before everyone had liquid mud sloshing around in their boots, having fully tested how well-laced they were. These couple of miles were exhausting and had few sights to take one’s mind off the challenge of crossing the next bog whilst maintaining the bearing. We should all be grateful for the actions of the ramblers who led the Kinder Trespass but we couldn’t help but wonder why they chose such a desolate piece of moor.

We eventually picked up a stream, which led us to the waterfall at Kinder Downfall. We could see this from some way off, as the wind was against the ridge and was blowing a plume of spray high into the air.

The rain had stopped and the views to the west opened out, over Kinder Reservoir, as we rejoined the official Pennine Way route. Navigation from here to the end of the walk was straightforward. As with the previous day, we found several stretches where a pavement had been laid. I can see why this is important to prevent erosion but couldn’t help but feel that it took some of the wildness out of the walk.

We stopped for lunch just after crossing the A57 (Snake Pass). A friend had told us that Bleaklow was even more challenging than the top of Kinder Scout, but it was much less boggy and had some lovely parts where we walked alongside sunken streams.

We eventually reached Torside Clough, with views down to the reservoir. The path grips the side of the valley and is overgrown each side. This means that you can’t easily spot where the path is going or, when looking back, where you’ve been. It also seems as if it will never descend but then it suddenly drops down and joins a disused railway line running alongside the reservoir.

From here, it was just under three miles of easy walking back to the car at Hadfield. We all collapsed onto the tarmac of the car park and gratefully removed our boots before readying ourselves for the drive to Hathersage to collect the other car.