Our first ever long weekend walk. We wanted to do a linear or circular route over three or four days, staying in pubs or B&Bs and carrying everything we needed. After some research, we discovered the Limestone Way. This runs across the Peak District from the Dove Valley at Rochester to Castleton. Our research told us that it could be nicely chopped up into reasonable-length segments, including pub stops for lunch.

The section we did started at Matlock and covered much of the lower and less rugged half of the Peak District. We didn’t stay on the Limestone Way the entire time as there were some interesting minor detours, such as through Monk’s Dale nature reserve, and we were aiming to finish at Edale, where the Pennine Way begins.

To get to and from the walk, we drove to Edale, where the landlord of The Rambler Inn kindly allowed us to leave a car in his car park. We then drove a second car south to the start at Matlock. One member of our party was able to take the train from London to Matlock, catching another train home from Edale on the Sunday.

Alongside the necessary OS maps, we had a copy of Walking The Limestone Way (ISBN 9780907758921). The textual descriptions were useful but the maps inadequate. 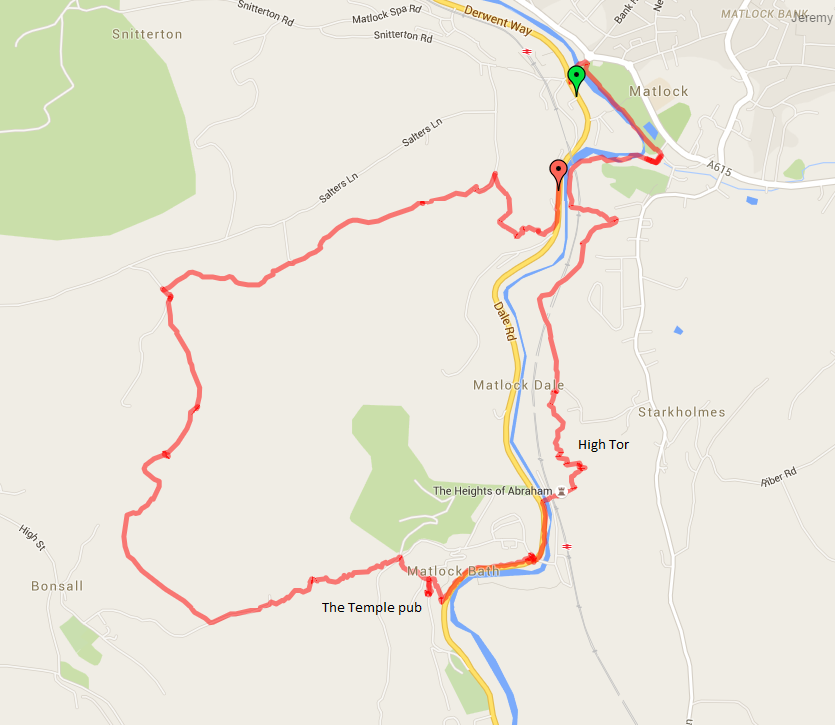 Matlock is at the north end of a gorge, within which is Matlock Bath. Despite being in the centre of the UK, the latter almost has the feel of a small seaside resort.

Starting just after lunchtime, we walked along the east side of the gorge to reach High Tor and then dropped down into Matlock Bath. After a quick drink at The Temple, as recommended by The Good Pub Guide, we headed up the very steep path to climb Masson Hill before looping back across farmland to Matlock. 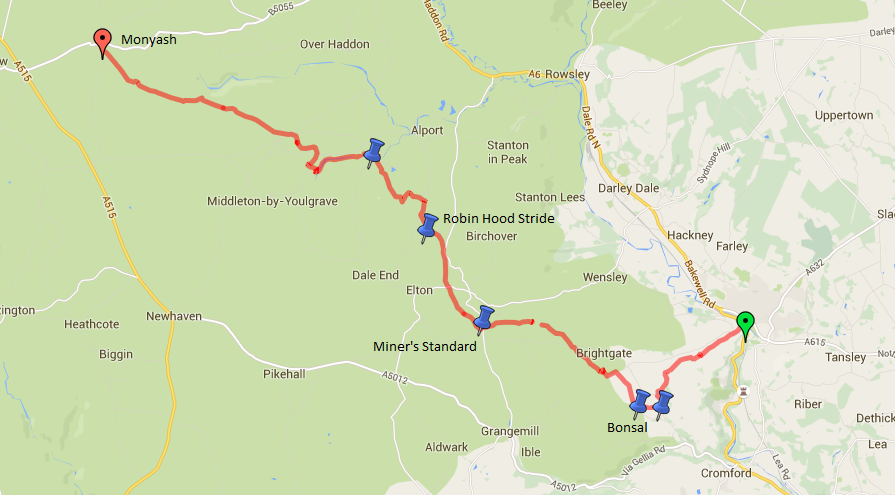 At first heading south-west to pick up the Limestone Way, the walk quickly entered the rolling hills and sheep-farming land of the Peak District. Despite a little drizzle, the countryside was picturesque and there were some interesting villages on the way such as Bonsal with its well dressing.

We stopped for lunch in The Miners Standard on the edge of Winster before heading back on the trail towards Monyash, passing by Robin Hood’s Stride.

Although there were no significant climbs, it was a long day. Being fairly new to this style of walking, one of us had somewhat overpacked his rucksack, causing him to overbalance on the path out of Cales Dale and slip down the hillside. Having hauled him back onto the path, not laughing of course, we hit the last few miles into Monyash. This section seemed somewhat long, enlivened only by meeting some potholers, wearing full regalia and who we later met again in The Bulls Head albeit with one fewer in their party; presumably left behind in a dark cave… 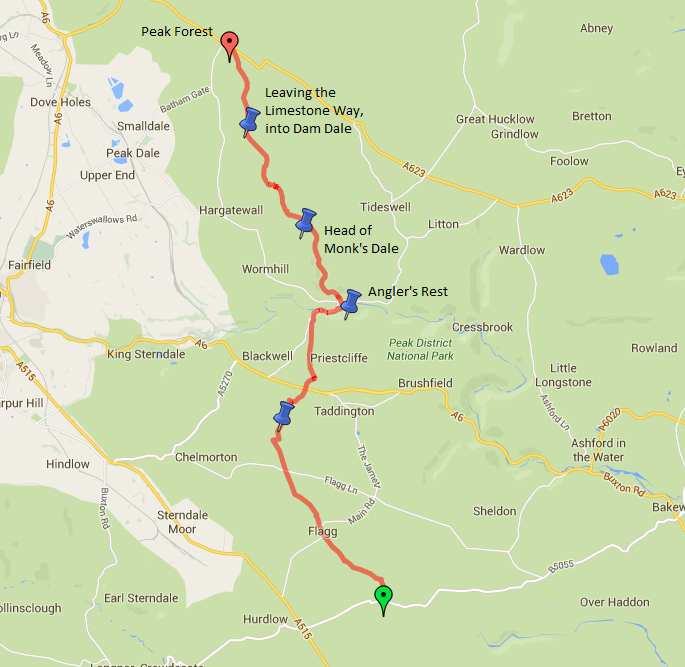 Leaving Monyash, we continued to head north. The route picked up Sough Lane, up and over some minor hills to give good views to the north before dropping down to the river Wye, where we stopped for lunch at The Anglers Rest. We rested a bit longer than planned, due to some rain, before starting off again. At this point, we chose to walk along Monk’s Dale rather than stay on the main route. This was a wild and overgrown nature reserve, quite different to the paths we’d been on thus far. Coming out of it, we again picked up the Limestone Way only to leave it soon after to head along Dam Dale.

The post-lunch part of the walk having been extremely pleasant we then had an altercation with a herd of inquisitive cows before arriving in Peak Forest. 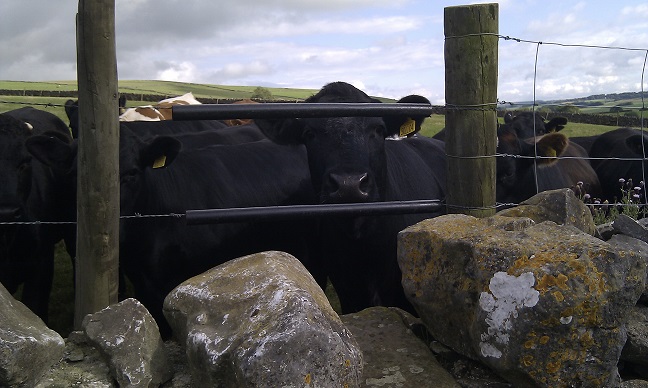 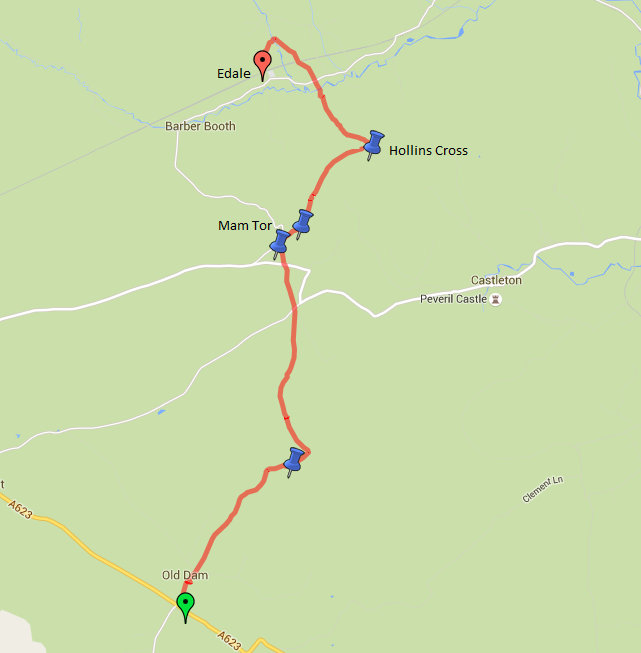 This day was quite a bit shorter than the previous two and took us over Mam Tor and along Great Ridge to Hollins Cross, with its magnificent views, before dropping into Edale where we had a celebratory drink in The Rambler Inn before driving back to Matlock to collect the other car on the way home.