This weekend walk was two very tough days and a much easier half day, covering quite a few miles of the Pennine Way.

We drove up on the Thursday afternoon and spent the evening in Middleton-in-Teesdale. The next morning, a minibus taxi took us around to the start of the route at Kirkland, a tiny hamlet just west of Cross Fell. From there, we walked over the fell and down to Appleby-in-Westmorland. On the Saturday, we walked from Appleby and along the glaciated valley of High Cup Nick before following the Pennine Way across the moor to the cascade of Cauldron Snout and then onto the High Force Hotel. On the last day, having taken the small detour to see the High Force waterfall, we hiked the last few miles along the river back to Middleton.

Although our rooms were booked at the Forresters Hotel, we preferred the look of the menu at the Teesdale over the road for dinner (plus they had a wider choice of beer and served food until 9pm, which was useful as some of our party were a little later than others). 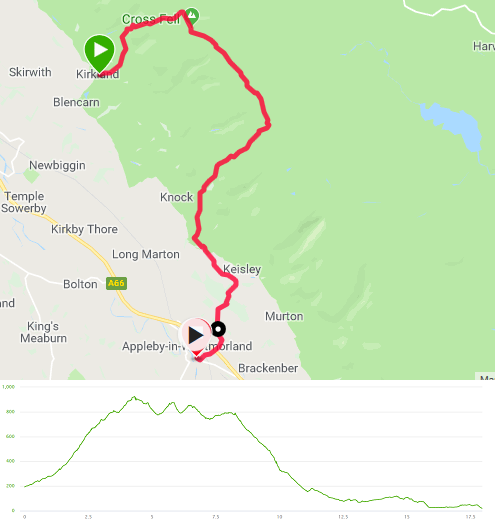 The day didn’t start too promising, as we’d failed to realise we needed to pre-book breakfast at the hotel and the weather was a bit on the damp side. The former was sorted by Cafe Fresh, into which we piled the instant he unlocked his door. The latter was addressed by waterproofs.

We’d booked a minibus taxi from the Hodgsons Group, who didn’t mind waiting a few minutes as we finished Cafe Fresh’s fry-up (the service being at a somewhat sedate pace). The drive took an hour and we were deposited by Glebe Farm in Kirkland above which Cross Fell loomed with its top in the cloud. We set off and the lane soon turned into a footpath and began to rise up onto the fell. It circled towards the north west and onto a saddle and the gradient began to increase further. The hills of the Lake District were clearly visible behind us as we turned south onto the Pennine Way for the final ascent, at which point we went into cloud. The wind was quite strong at the top and a mixture of light rain and sleet was coming in from one side. We huddled against the wall of the shelter atop Cross Fell whilst we adjusted the amount of waterproof clothing in use and had a snack.

The next section headed south east, gradually losing height along an undulating wide ridge. The weather by now was pretty unpleasant and the visibility was no more than a hundred yards, meaning that we relied on compass, GPS and cairns for navigation. Some of the party were moving more enthusiastically than others and we had to make sure that each group could be seen by someone else. At the top of Great Dun Fell, two miles and an hour from Cross Fell, there is a giant golf ball radar station - but we could barely see it. Reading up on this afterwards, it seems that this is not unusual as it is also a site of cloud research experiments, due to being under cover for 2/3rds of the year.

The path began to sweep south east and to lose height more steeply. We very quickly came out of the wind and icy rain and could again see the Lake District (as well as the Yorkshire Dales). The descent was very pretty and we even picked up some sunshine - quite a difference in a very short period of time. Once off the fells we came into farmland and we walked into Dufton. This had been our preferred overnight stop but has limited accommodation - apparently a problem for many people who are walking the Pennine Way. We stopped for a pint in the Stag Inn, where one of our party negotiated a taxi to save him the last three miles. The rest of us put our packs back on and headed to Appleby with only a slight detour due to getting slightly lost in Flakebridge Wood.

The Royal Oak was very comfortable and, once we were sufficiently rested, we walked into Appleby to the Ashiana for a really rather good curry. 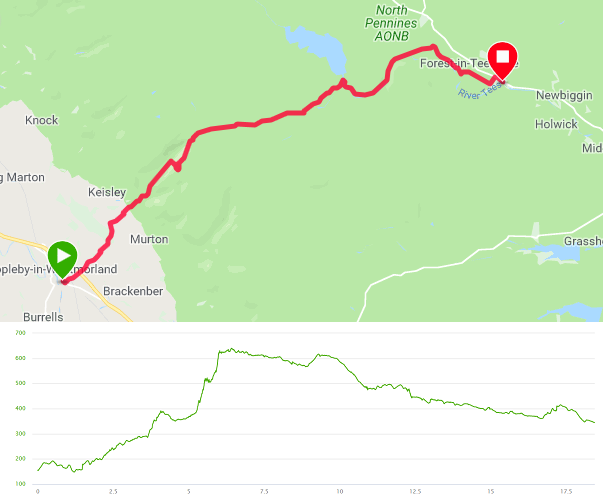 Similarly to Friday, this day had also been elongated due to having to stay in Appleby rather than Dufton. As a result, the first couple of miles ran through farmland along a lane parallel to the route we’d done the afternoon before. The lane became a path through woods and then rose up over the foot of Middletongue Crag before dropping into the valley of High Cup Gill. The sides of the valley rose dramatically and steeply. It was wet underfoot but otherwise quite gentle. That said, the rocky slope of High Cup Nick loomed at the end of the valley. To be frank, I thought it was quite ominous and (as previous walk reports will attest) I’m not a huge fan of scree slopes or climbing up loose rubble. As a result, I decided to go up the south side of the valley to pick up the path that had come over Middletongue Crag. One of the group decided to accompany me although I think he probably regretted it. The side of the valley was grassy but it was also very very steep. Not only that, but after three hundred feet or more of climb (much of it requiring hands) there was a despicable false summit.

The others scrambled up the Nick itself. When we regrouped at the top, they reported that it was nowhere near as fearsome as it had appeared. It was also much faster than the route the other two of us had taken. On the other hand, my friend and I had been rewarded with some amazing views of the top of the valley. So there…

The next section crossed several miles of moorland, first following the river and then, after crossing over a bridge, picking up a farm track. It was a bit dull, to be honest, and we were all pleased to drop off the moor and reach the dam at the edge of Cow Green Reservoir. This is from where the water cascade of Cauldron Snout drops dramatically over a number of huge rocky steps. The footpath hugs the side of the rocks and requires a bit of thought to find the best path down.

We reached the base of the waterfall and the path became a mixture of boardwalk and rocks. I thought it was most enjoyable but a couple of members of the party found it a bit tricky underfoot and the group spread out. As the path became easier, the next section was unexpectedly beautiful as we headed along a valley floor to come into Teesdale.

Immediately after a bridge over the river, we turned south to follow the riverbank for a mile before a short climb at Low Knott. Shortly after this, after passing through a farm, we paused to watch a barn owl flying through the trees on the edge of a wood. We then turned left onto the track that led to the B6277, where we turned right for the few hundred yards to the High Force Hotel. 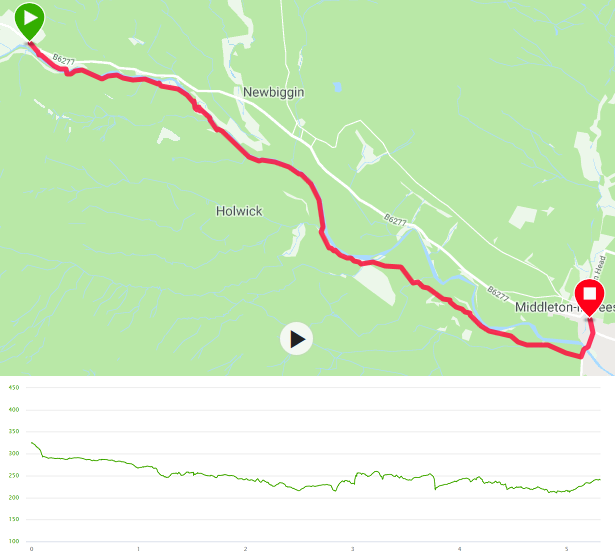 After the previous two days’ exertions, we were pleased that there was a straightforward riverside walk back to Middleton. Before we left, however, we took advantage of the hotel’s access to High Force. This is a huge waterfall, twenty metres in height and with a vast amount of water tumbling over. Having taken sufficient photos, we picked up our packs from the hotel and set off along the River Tees.

A short distance along the path is Low Force, a much smaller set of waterfalls. A couple of canoeists were throwing themselves over the edge and we paused to watch.

The rest of the path was pretty but uneventful and we walked into Middleton only a couple of hours after setting off.