This was a circular warm-up followed by a three-day linear walk, taking in some of the highest peaks in Snowdonia.

On the Thursday, we walked around the valleys surrounding Beddgelert before lodging at Rhyd Ddu. The next morning, we took a minibus over to the north side of Snowdonia and walked back over the next three days, going over Snowdon itself on the last day. Accommodation options were a little limited, so we stayed in Youth Hostels on the Friday and Saturday nights.

It’s worth noting that mileages over this weekend were lower than most of the other walks I’ve done. Snowdonia’s geography does not permit speedy walking! 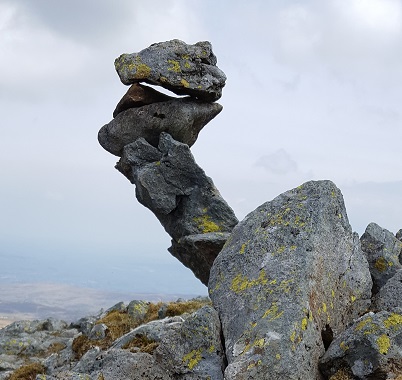 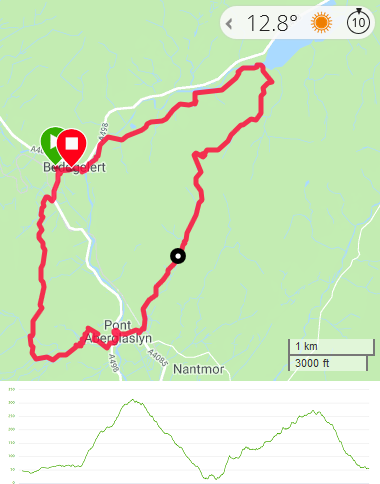 Starting at the car park in the middle of Beddgelert, we walked along the river, heading north-east towards the Sygun Copper Mine. Shortly afterwards, the path opened out onto the shore of Lyn Dinas. We paused here to have a picnic before turning right, to head away from the lake and up onto the hillside, heading south to south-east.

The view back over the lake was worth a look-back before the trail levelled out into moorland. About three miles into the walk, at pretty much the highest point, there was a bit of path confusion. An OS map consultation and a compass got us back onto the route we wanted, heading south and passing abandoned mine paraphernalia as we headed to the bridge at Aberglaslyn. The route left the moorland and went into woodland as we descended.

Across the bridge and river, we turned left and walked a couple of hundred yards along the road until a path on the right took us up into the woods again. There was then a complete path-to-map breakdown and we found ourselves a bit further north than the map suggested we should be. This necessitated some scrambling and barbed-wire-fence-jumping towards the south-west before we emerged from the woods and could pick up the path indicated on the map again. I’m not sure where we went wrong but the result was that, after the scrambling, we had to go uphill across a very boggy field and the day’s gentle(ish) warm-up walk turned into a brief bit of a slog.

As we headed north along the side of the valley, taking in good views of the mountains to the north, the path occasionally became a little indistinct but we ultimately dropped down off the hillside into woods again just outside Beddgelert to return to the start.

The walk didn’t take us past Gelert’s Grave, but this would have been easy to add as a short detour at the start (or the end).

Once back at the car, we drove the few miles to our accommodation at The Cwellyn Arms, where we also had dinner. 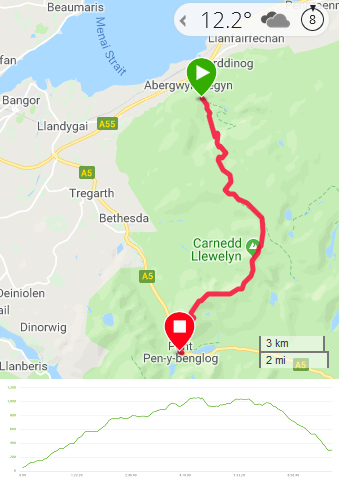 When we sat in the hostel at the end of Friday’s walk, one of the group said, “no wonder there was no one up there; it’s really hard work to get up onto and a nightmare to get down again.” The route had contained a couple of bits that were really really tough. The first due to exertion and the second due to being near-vertical (we’re walkers, not climbers!).

Furthermore, in this area of Snowdonia, there isn’t a huge amount of accommodation to choose from and unfortunately the YHA at Idwal doesn’t provide food. After a bit of searching during the planning phase, we discovered that it is within range of Tesco’s home delivery service. This meant that, a couple of days before we went, we placed an order for everything you need to cook your own curry - including poppadums, naan breads, chutneys and a case of Cobra beer. No need to slum it whilst away! In the order, we also included stuff for bacon sandwiches on Saturday morning and things for lunch.

Parts of this walk were cribbed from a route in Trail magazine and were described as the “walk of a lifetime” and it was really good, despite the organisation overheads and the toiling on the trail.

In the morning, we had booked a minibus to take us from Rhyd Ddu to Aber Falls. This cost about £75 and took just under an hour.

Once we’d been dropped off at the Aber Falls car park, we followed the main path south towards the falls. Before reaching them, just over a mile into the walk, we took a switchback path over a stile to the left. Looking up from the bottom, you can see on the hillside above where it sharply turns right again and crosses a scree field. At the end of this section, the path seems to disappear. We had sufficient faith to give it a go and far from disappearing, the scree path turned into a well-defined trail among the rocks towards the top of the falls. That said, there was one slippery step where everyone trod gingerly.

Once past the rocks, we found ourselves at the bottom of another valley. The details in Trail magazine were a little bit vague at this point but the steep hillside to the right needed to be climbed. This was one of the really tough parts of the walk. It was a choice between walking further down the valley and then scrambling up rocks, heading directly up through the heather or otherwise trying to find a path winding up via the sheep tracks. I think we tried them all and none were easy.

After a rest on the top of the ridge, we finished the climb up to the rocky outcrop of Bera Mawr. From here, it was an easy walk over to the outcrop of Bera Bach. A moorland path then took us to Carnedd Gwenllian and we stopped in the lee of the hill for lunch.

The next section was truly stunning, as we headed to the summit of Carnedd Llewellyn. This is the second highest mountain in Wales, only twenty metres lower than Snowdon. As we left the peak, the path then crossed a narrow (but not too narrow) ridge to Carnedd Dafydd. The views along this whole section were knock-out and there was almost no one around.

Karma dictated that we had to pay for the views and that was soon to come. On the map, the route from Carnedd Dafydd to the hostel at Idwal looks direct. Yes, there are a lot of contour lines in there but nothing to indicate that there really isn’t much of a path. In fact, it took over an hour and a half to descend. Mostly it was never-ending climbing down through rocks but there were steep sections on scree (and I really don’t like paths that move under your feet). It was very demanding physically and mentally.

Some of the party, obviously more mountain goat than man, all but skipped down it. From my perspective and looking back at the hillside from the bottom, I said that it did not look passable in any way. Apparently there is a slightly more gentle path further east. If I’m there again, that’s the one I’ll be looking for.

Thirty minutes after we collapsed in the hostel, a van turned up with our Tesco order. An hour after that, we were showered and eating curry. 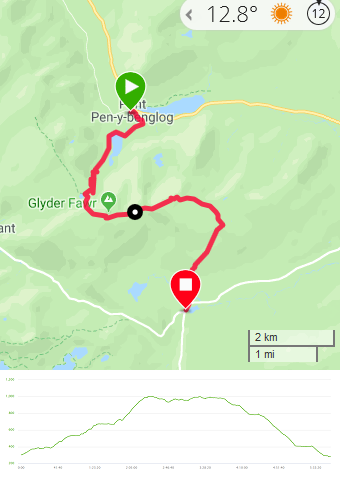 Leaving the YHA behind, we walked up to and along the shore of Llyn Idwal and began the climb up the Devil’s Kitchen. This was steep but mostly clambering rather than scrambling and certainly nowhere near as hairy as the descent the day before. We paused by a rock wall to look back over the lake before finding ourselves at the foot of a long scree field, which went on almost to the very top of Glyder Fawr. This section wasn’t ridiculously steep but it was tiring underfoot and the group spread out along the slope somewhat.

Once we had reassembled amongst the rocks at the top and had taken in the panorama, we headed towards Glyder Fach. Enthusiastically climbing the first rocky outcrop we came across, we quickly realised that Glyder Fach was a quarter mile still further on and we scrambled back down again.

Once we’d established the correct outcrop that forms the summit, we had fun clambering around it and standing on the outstretched rock finger of Y Gwyliwr. We also paused for lunch and ate whilst watching the walkers crowded on top of Tryfan, several hundred metres to the north. With binoculars, we could even make out the lunatics jumping across the gap between the rocks “Adam and Eve” - a short jump but one where “…the penalties of failure are unpleasant in the extreme” (Frank_Showell_Styles).

From Glyder Fach, we continued eastwards and the rocky path soon softened to moorland as we headed off the mountain. We were in good time so spent half an hour snoozing in the sun on the hillside before turning south on the Miner’s Track. Once over a couple of walls and through fields, we soon reached the road and the Pen-y-Gwryd Hotel.

After soothing our feet with a couple of pints of beer, we set off to the YHA. The map showed only the road but in fact there is a path a short distance down the A498 that was a more pleasant route up to YHA Pen-y-Pass, where we ate dinner (not having to cook it ourselves this time, as Pen-y-Pass has a restaurant) and slept. 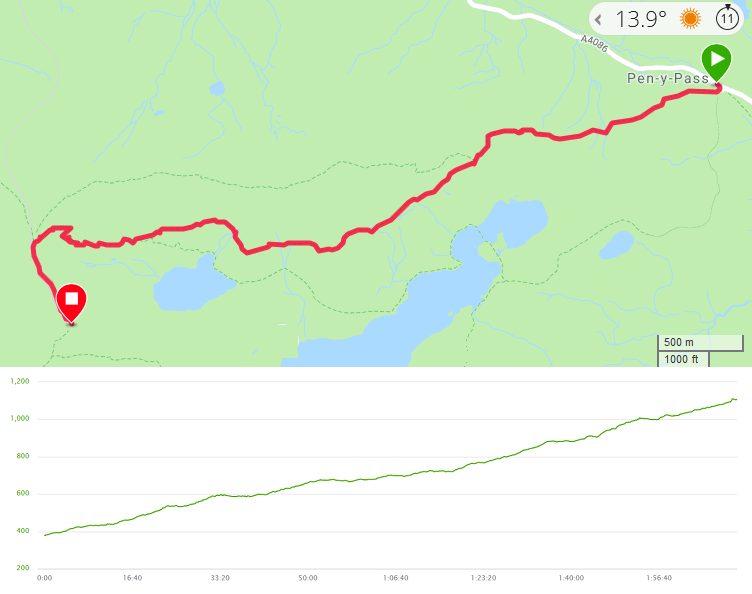 The next morning, our party of eight split into three groups. Four hardy souls had decided to ascend Snowdon by way of the precipitous ridge of Crib Goch. The rest were feeling somewhat less hardcore but split into two further groups. One of these pairs planned to go around the left-hand side of the horseshoe, over Y Lliwedd. The last pair, which included myself, having never been up Snowdon on any route (except the train whilst on a family holiday), chose the much more straightforward Pyg Track.

The Pyg Track was expectedly busy and climbed steadily for most of its length. There was a very small amount of scrambling and a short and steep zigzag before we reached the railway where the trains come up from Llanberis and we joined the crowds. At the top, we sat in the cafe and enjoyed the views with cake and a drink whilst we waited for the others.

The Crib Goch crew arrived an hour after us, with tales of being pinned against the ridge by the wind. An hour after that, our final two walkers arrived, looking somewhat weary and with tales of the final scree slope and the other walkers who were frozen upon it, crag-fast and unable to go any further. The Pyg pair’s previous concern at a lack of a sense of adventure turned into relief that we’d taken the easier route (memories of the descent two days ago being much too fresh). 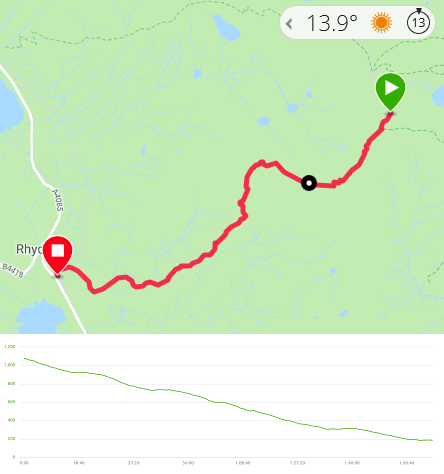 As can be surmised from the variety of routes taken above, there are many paths around Snowdon. In order to get back to our cars, we dropped off the back of the summit, directly away from the cafe. Given how busy the east side of Snowdon was, the Rhyd Ddu path was quite peaceful. It starts along a ridge, with yet more excellent views across Snowdonia, before dropping down steadily to a crossroads, where a right turn and a few more minutes brought us into the village railway station just in time to see a steam train pass by. A hundred metres along the road was The Cwellyn Arms, where we stopped for a drink before picking up our cars and heading home.