The main aim of the weekend was to do the Fairfield Horseshoe, which you can start from Ambleside. We based ourselves there, driving out to the start of a couple of other walks on the other two days.

We stayed at the somewhat superior YHA. Although it’s a mile south of the town centre, it has an enviable position on the shore of Lake Windermere and you can sit out front at the end of the evening …midges and weather permitting. 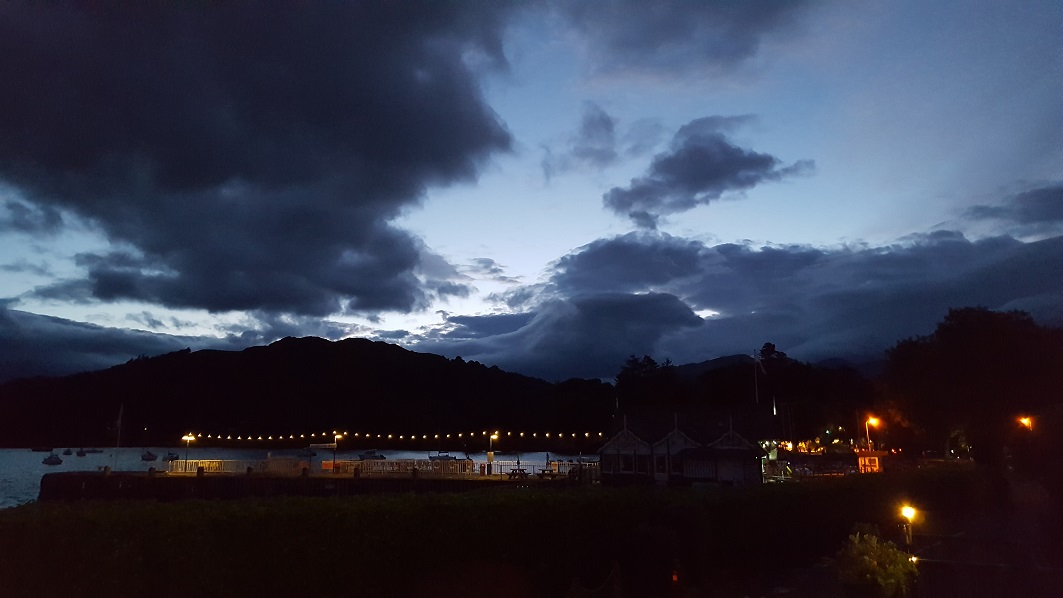 We had thought to do a shorter walk, in order not to overdo things before the Horseshoe walk on the next day. We’d slightly under-estimated the time it takes to go over Crinkle Crags, however. A Lakes walking guide to whom I later spoke said that most people do. The tops of the crags are very rugged and there’s scrambling and bouldering as well as the more usual path-walking.

We had added two extra bits to a walk we’d found in a book, first taking a more southerly route from the car park at the Old Dungeon Ghyll Hotel in order to go over the Pike O’Blisco and later a short detour to take in Bow Fell.

The Pike O’Blisco is quite a serious ascent from the road, mainly up rock stairs, and was probably the hardest climb of the whole weekend. Once you’ve taken in the first of many great views over Langdale, the path drops slightly more gently off the back of the pike and heads over to the Crags.

The Crags are a sequence of rocky outcrops that the path wends its way over and around. The second or third one presents a choice - you can either scale the foreboding “Bad Step” or take a path to the left and go around. The Bad Step is a cleft in the rocks, up the right side of which you can climb about ten-to-fifteen feet before scrambling to the top of the crag. Most (but not all) of our party took the easier option.

At the end of the Crags, the path heads down a peninsula back into Langdale. Before you take this route, however, you can go up Bow Fell. It’s not much more than an extra mile, climbing an extra 100m, but the views from the top are wonderful - out to sea and Scafell as well as back over Langdale. My mobile phone decided to start roaming at this point, as it picked up the signal from the Isle Of Man.

The Fairfield Horseshoe goes out north from Ambleside, along one side of a glaciated valley to Fairfield itself (873m), which bridges the top of the walk to the other side of the valley for the return trip. It’s quite a long walk and there’s quite a height gain overall but it’s well-trodden and you’d have to try hard to get lost (at least if you get good weather, as we did).

The view from Fairfield back to Ambleside is spectacular, taking in Lake Windermere and Coniston Water. The valleys alongside which you are walking are beautiful and a geographer’s dream, as you can clearly see the remnants of those ox-bow lakes about which we all learned in school. 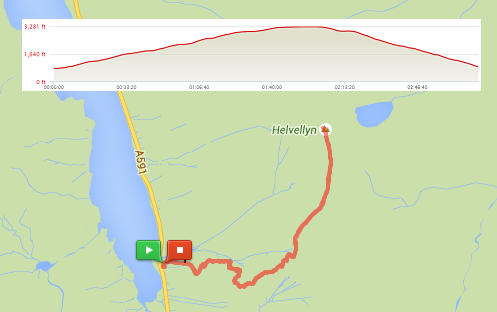 On the last day, we decided to add Helvellyn to our list of conquered peaks. We chose to go up from the car park at the south end of Thirlmere. The lake is quite dramatic, particularly in the misty weather to which we’d awoken. Unfortunately, the mist was a symptom of the low cloud cover, which closed in by 500-600 metres so there was little to see other than the shadowy shapes of other walkers. The weather on top was pretty fierce too, with a 20-30mph wind driving everyone into the lee of the X-shaped shelter.

Despite Helvellyn being the third highest mountain in England, the ascent is much easier than Scafell Pike. The bottom half is rather steep but then it levels out to provide a much gentler slope up to the summit.

We had planned to wait until the top before deciding whether to go around to Striding Edge or down to the top end of Thirlmere (from where you can walk along the shore edge) but the weather was such that we just decided to go back the way we came.