The South Downs Way runs for a hundred miles from Eastbourne on the Sussex coast to Winchester in Hampshire. We decided to walk the first half of it over three days, finishing at Hassocks just north of Brighton. One of the benefits of this was that the whole group could easily take the train at both ends.

Outside Eastbourne, the South Downs Way splits into two routes for the first few miles - a footpath along the coast over Beachy Head and Seven Sisters versus a bridlepath running inland.

Along with the convenience of rail travel, this inspired us to fit in a nice warm-up walk, by getting off the train two stops from Eastbourne, at Polegate, to pick up the bridlepath into town (with a brief stop at a country pub that had been highly recommended). 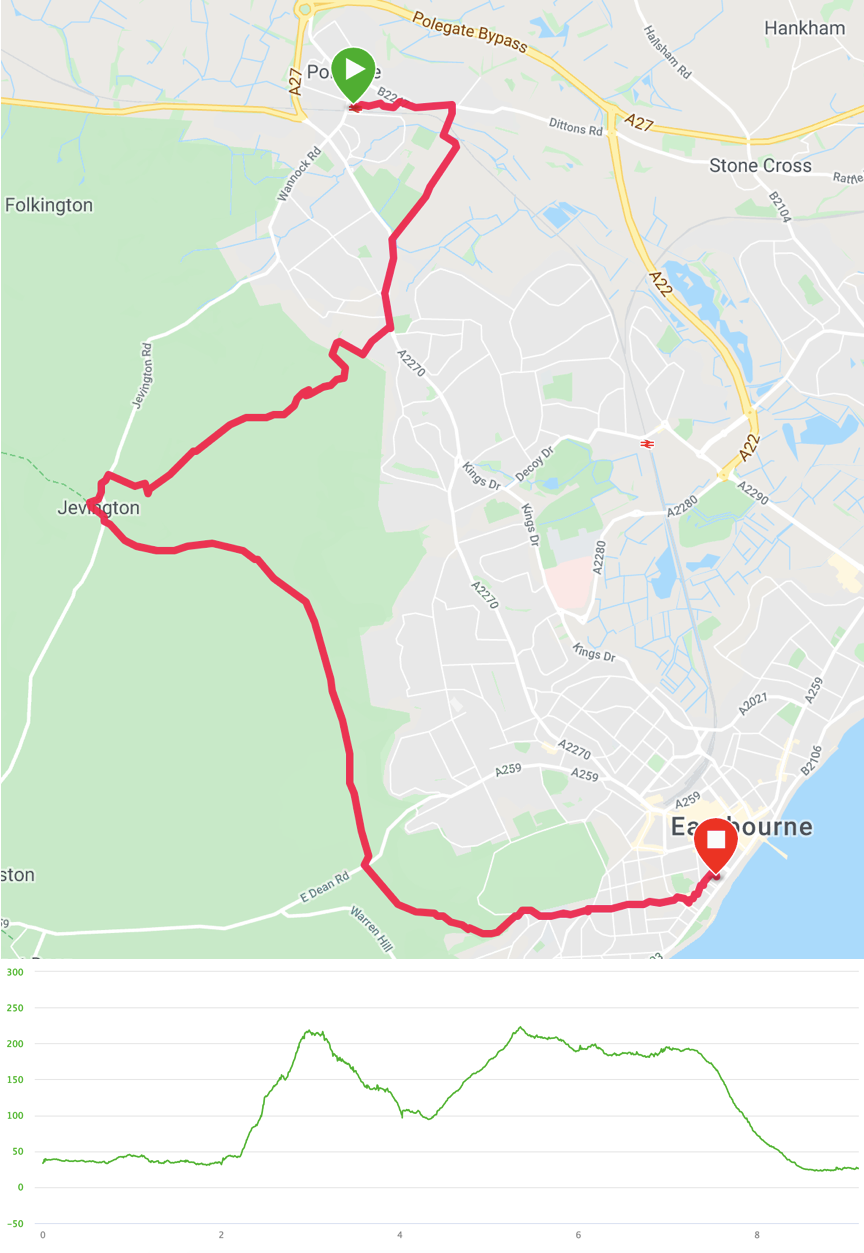 Exiting Polegate station, we turned right to head east across a car park and through a housing estate onto a road, running parallel to the train tracks, until we could pick up a footpath at Lynholm Road heading south. We went under the railway and across a couple of grazing fields to reach Willingdon where we again walked a similar distance along a road to pick up a footpath at Meachants Lane, which entered farmland and began to climb.

The target here was the top of the hill known as the Combe. It was a relatively steep path but pretty short. From the top, we could see a long way over Eastbourne. Continuing south-west, a ridge dropped slightly into sparse woodland to reach Jevington, where we stopped for a pint at The Eight Bells. It’s a nice pub and we would have stayed longer, but we were aware of the time and didn’t want to be walking in the dark.

It was then straightforward to find the South Downs Way bridlepath, heading south-east, which runs along another ridge overlooking Eastbourne. The views were nice but the weather was a bit damp so we didn’t take our time. After two or three miles, the path turned more easterly and dropped down into the outskirts of Eastbourne. It was then a mile or so through the streets to reach the hotel, which was just behind the seafront.

Having dropped our bags off, we went out to try Eastbourne’s night life and had a nice curry at the Ashoka. We then went back to the hotel, pausing only to prove that there is a reason small lifts have clearly-labelled weight limits. Eventually, the six of us managed to get the attention of the night manager to come and open the doors so we could clamber out to head up the stairs to bed.

Saturday - Eastbourne to Alfriston, via Beachy Head and the Seven Sisters 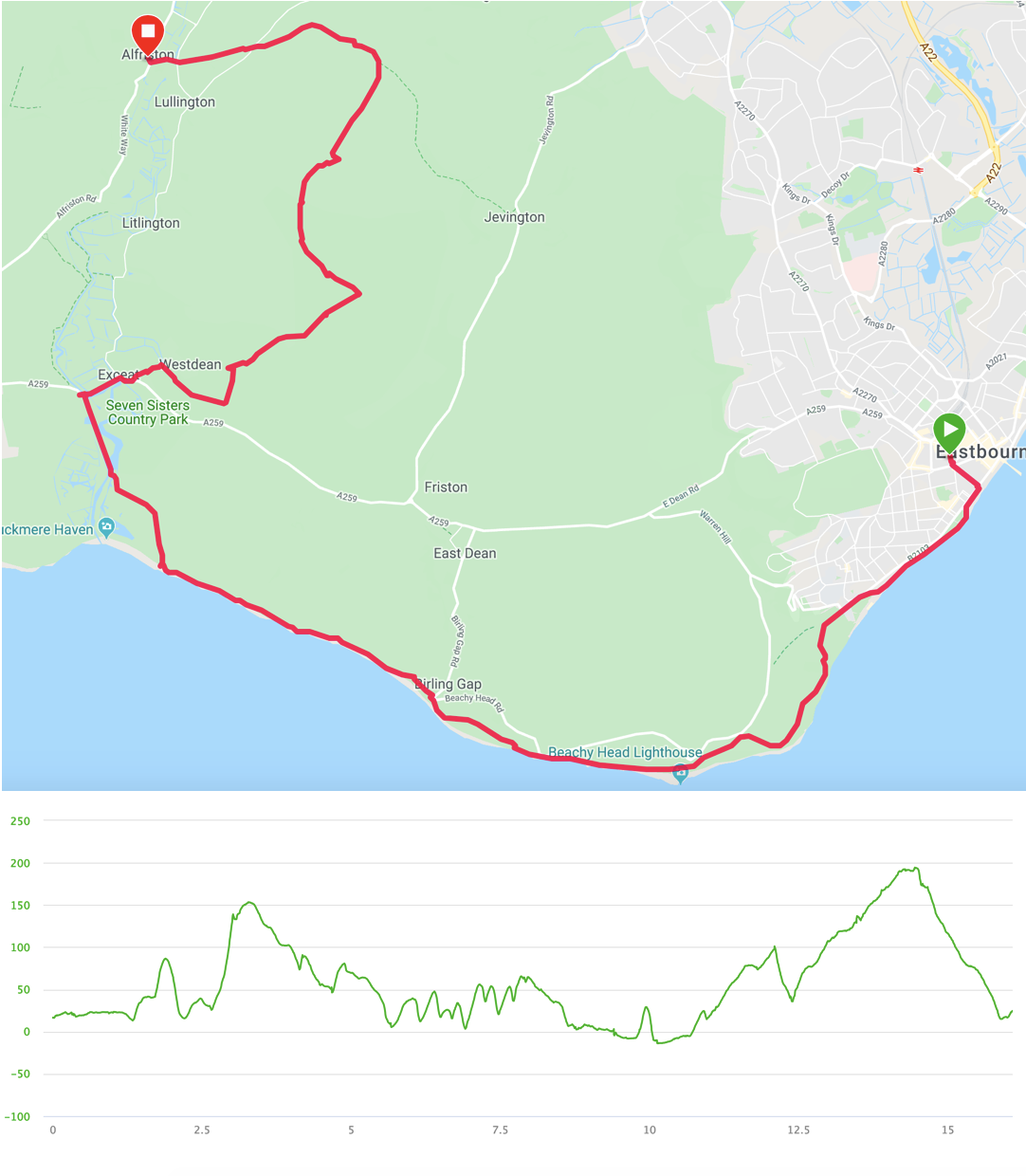 After breakfast in Wetherspoons, we walked along the seafront out of town. Just over a mile and a half later, shortly after climbing inland a little, we reached the official start of the South Downs Way footpath. This rose some more before turning back towards the sea and the cliff edge, where it dropped across a wild-looking football pitch before going steeply upward and we huffed and puffed our way up to the WWII Bomber Command monument on top of Beachy Head. The weather was drizzly and misty and there was little to differentiate the grey sea from the grey sky. Since we couldn’t enjoy the dramatic views out to sea, one of our group gave other walkers a treat by changing his trousers at the top of the UK’s highest chalk cliff.

From Beachy Head, the path stayed close to the cliff edge (we had been warned by a dog walker in Eastbourne not to get too close to the edge as erosion has made much of it somewhat unstable) and rose and fell down to the village of Birling Gap. The weather continued to be troublesome, so there were few views other than some moody sightings back east towards the Beachy Head lighthouse.

Birling Gap didn’t detain us and we pressed onto the Seven Sisters, a sequence of chalk cliff peaks and dips. They were unexpectedly hard work. None are especially challenging alone but I found them quite tiring when taken one after another. I also lost count and could have sworn that an eighth sister had been added, just to punish me.

Now eight miles into the day’s walk, from the top of the seventh sister, we could see the flood plains of the Cuckmere river and the path turned inland and dropped us down to the river’s edge, which we followed to reach a bridge where The Cuckmere Inn stands, wherein we took lunch.

We were all rather damp and dried our waterproofs as best we could. Afterwards, the party split into two. The majority decided that they had been drizzled on enough and took the official South Downs Way route towards Alfriston. I had found a spot of second wind, however, so a couple of us decided to head north to seek out The Long Man of Wilmington.

Having parted from the others at Exceat, we swiftly got lost in Friston Forest. The OS map was not quite detailed enough and one path looked very much like another. We navigated our way north with compass and educated guesswork to leave the woods at Lullington Heath nature reserve where we joined the South Downs Way bridlepath just above the hillside on which the Long Man had been carved. The weather had improved but mild fatigue made us decide to admire him from above and the side rather than scrambling down to look up at him.

This turned out to be the highest point of the day and the last mile and a quarter dropped us down through cows and fields to cross a footbridge into Alfriston, where The Star Inn awaited with the rest of our party. 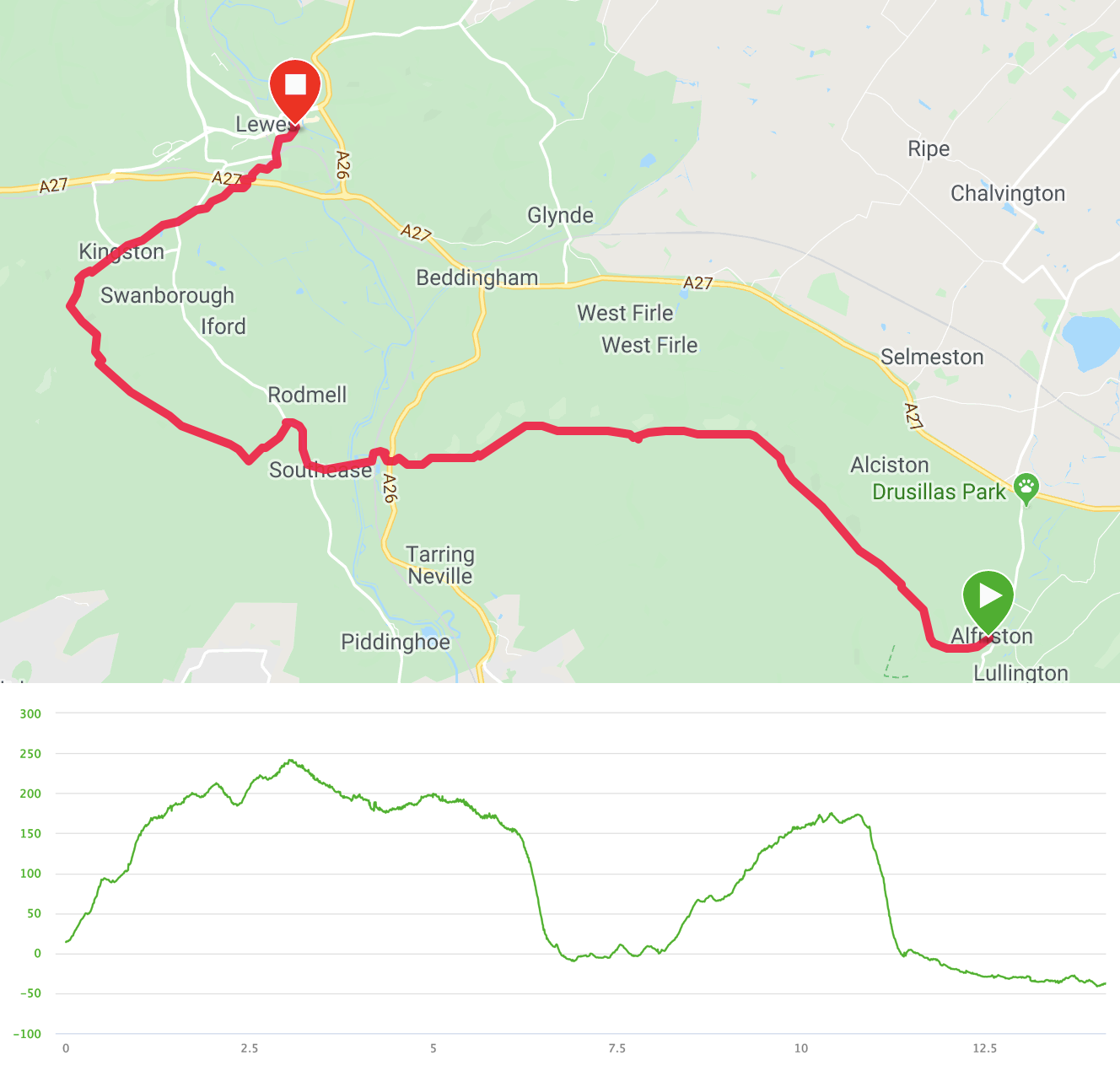 West of Alfriston, there is only one route for the South Downs Way and it stays inland to follow a sequence of ridges. The first of these feels surpisingly wild, given how heavily populated most of the south of England is.

The trail rose quickly out of town and opened up to sit above a steep escarpment to the north and a gentle roll of hills south to the coast. The weather was much improved from the day before, although a strong southerly wind pushed against us for the whole day.

We passed quite a lot of other people - walking, biking and horse-riding - everyone enjoying the clear views. The walking was quite straightforward and we eventually dropped steeply down off the ridge to reach Southease on the River Ouse (NB one of at least three Ouses in the UK). On the way down, we started to realise how slippery wet mud is on chalk and we had a couple of fallers.

Southease had a pretty little church with a round tower, after which we picked up the road north to rise into Rodmell. We were a little early for lunch and nearly pressed on, as the The Abergavenny Arms initially looked near-derelict. A spot of rain made us reassess and we realised that it was not only open but actually very busy. They kindly found us a table and we decided to have a light lunch. The alternative was to press onto Kingston, but we realised that would mean not eating until somewhat after 3pm and we weren’t sure our appetites would permit it.

We left Rodmell, pausing only to snigger childishly as we passed the row of houses known as “The Dicklands”. The track again rose quickly onto another ridge. The first half of this, however, was not as nice as the morning’s had been, as we walked for over a mile on a concrete farm track, with little view either side. This disappointment was tempered after a T-junction, where the path went right and then left to open out views over Lewes and the hills around. Satisfyingly, we could also look east to see the morning’s ridge stretching out behind us.

We left the bridlepath to take a very steep and slippery footpath down into the accurately-named Kingston-near-Lewes, where we had a cheeky pint in The Juggs, which had been our backup plan for lunch and which was very busy mid-afternoon so possibly may not have been able to accommodate us anyway.

From here, it was a simple and flat route through a farm, briefly along a road and then along a stream to pass under the A27 to enter Lewes through the ruined Priory, where we picked up some useful historical facts. The last mile was a bit of a trudge through town, however, as the Premier Inn was on the far side.

That evening, we found the best pub of the weekend (the Gardeners’ Arms) and had a marvellous Thai dinner in Pailin. 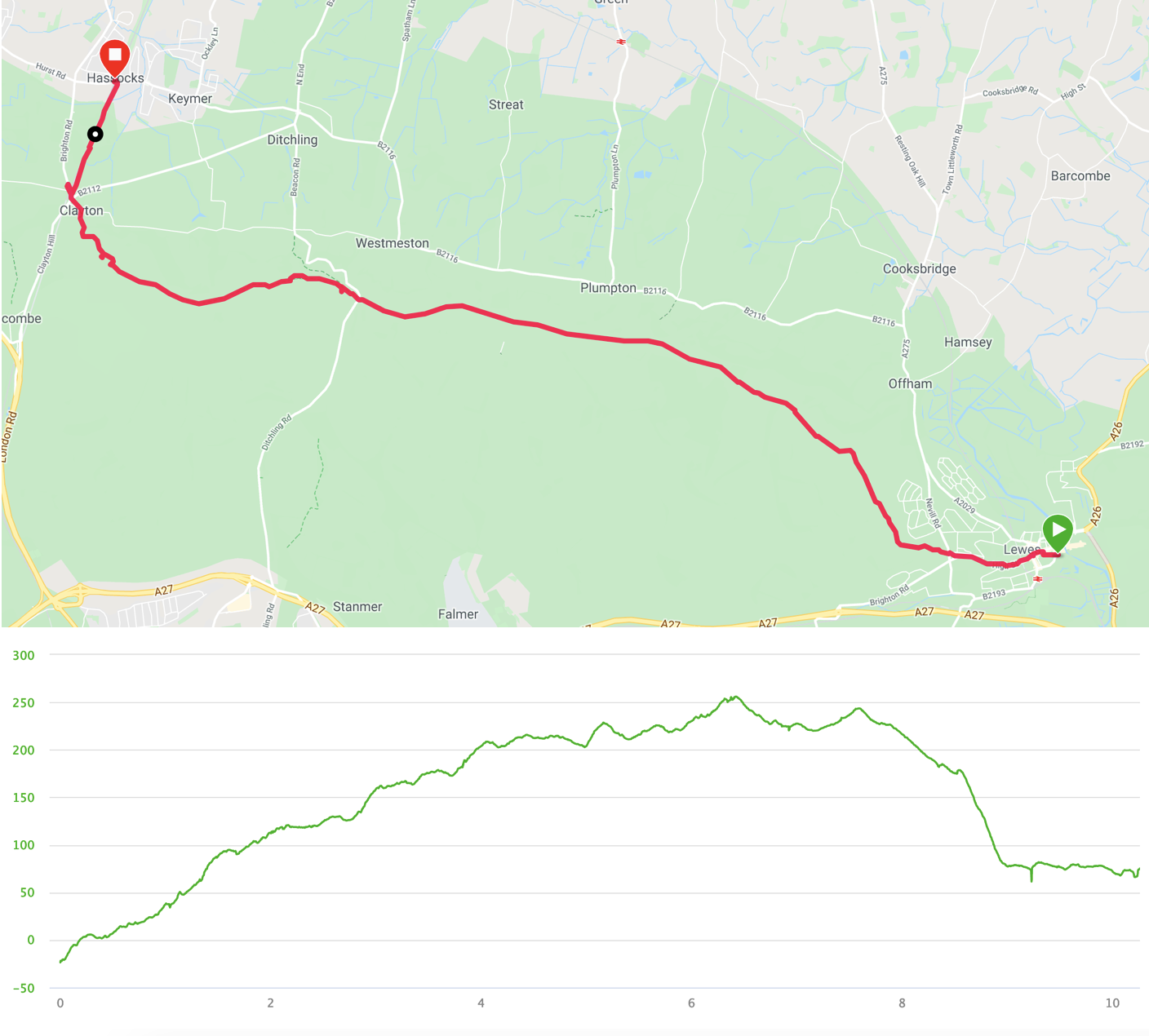 I don’t want to say that the last day was more of the same, as that sounds as if it was not enjoyable, but we again spent almost the whole time upon a long ridge. The landscape to the north had changed, however, and was a patchwork of farm fields rather than the wilder heathland of the previous day.

To reach the ridge, we crossed Lewes to leave the town heading north-west, passing by some of the sites where the Battle of Lewes took place. After the initial climb, the track levelled out a little. We actually kept rising for six miles to the high point at Ditchling Beacon, however, where one of our party had flashbacks to when he crossed over it on a bike as part of the London to Brighton cycle ride. We paused at the beacon for a drink and a snack and found ourselves surrounded by swooping house martins (my initial erroneous identification of them having been “swiftly” corrected).

Shortly after the beacon, we left the South Downs Way to take a path that began to fall until it passed the Clayton windmills known as Jack and Jill. We stopped to particularly admire whichever one was the post mill (Jill, apparently) before picking up the path into Clayton itself. As it was lunchtime, we had a sandwich in The Jack and Jill Inn before walking next to the railway line for the last easy mile north into Hassocks.

After a brief consultation to ensure everyone would be able to get home through the typical train service disruption, we said our farewells and headed home.