This was a two-day linear walk plus a circuit. Over the Friday and Saturday, we went from the south end of the Black Mountains into the Brecon Beacons and on the Sunday we did a simple loop around the Blorenge, just south of Abergavenny. Originally, we thought about pushing on into the Brecon Beacons for a third day, but the logistics at start and end of the day would have required more driving to shuffle cars around than we generally like to do. In the end, after two long days, a shortish and straightforward walk was quite welcome.

As is often the case on our walks, we were mostly lucky with the weather. We went just after the equinox, and the trees were just beginning to catch the autumn colours. On the moorland around Sugar Loaf in particular, there were many views across seas of reddening fern leaves.

To get to and from the walk, we planned to drive to Brecon to leave a car and then take a second car to the start of the walk at Abergavenny. One of our group, however, had injured his foot a fortnight before the walk, so we left a third car in Llangyndir so he could trim a few miles off the first day.

We stayed overnight in Abergavenny in the Black Lion Guest House. We tested a few of the pubs in town and found the best beer was in the Kings Arms. It also had a resident eccentric, who regaled us with tales of the legendary Captain Russell, allegedly both his GP and the heroic head of the local mountain rescue team. The derring-do of Captain Russell naturally became something of a meme for the weekend. 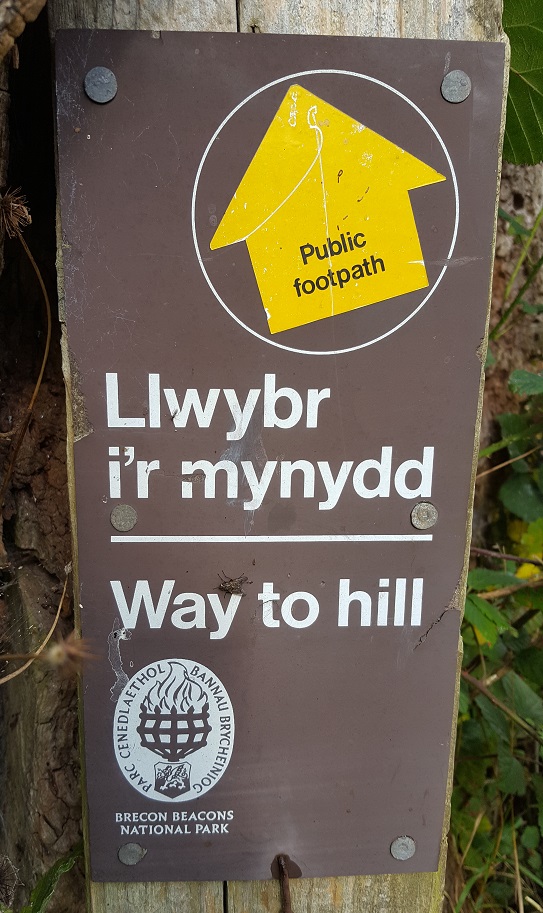 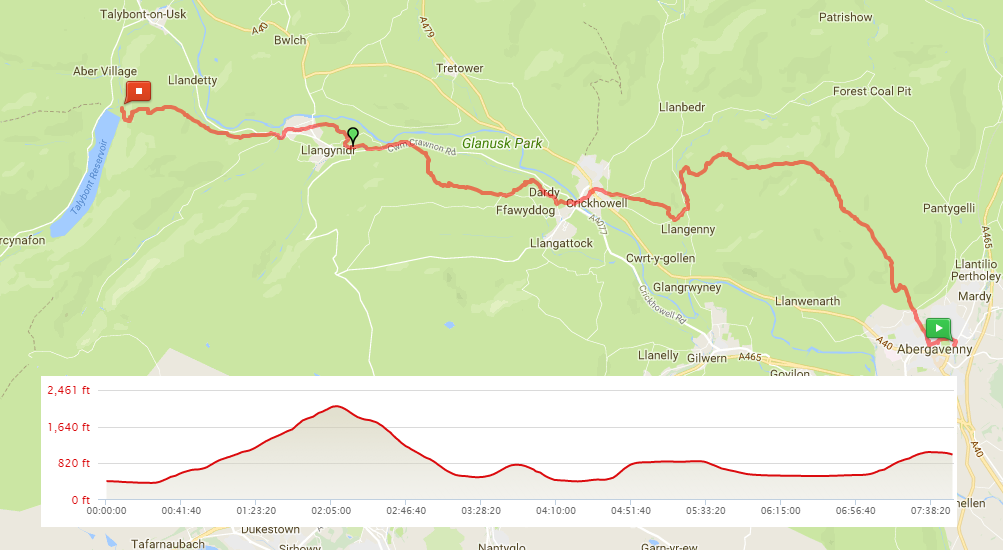 Starting at the Black Lion, we walked a mile or more to leave Abergavenny. It was then another three and a bit miles to the top of Sugar Loaf and the path climbed pretty steadily throughout. On the drive into Wales the evening before, Sugar Loaf had stood out for miles. From Abergavenny, however, it was all but invisible. It finally came into view once we were up into the farmland around the town and it was a relatively easy path to the summit. Having enjoyed the panoramic views - the Black Mountains to the north and the Brecon Beacons to the west - we headed along a ridge and started to drop down off the mountain.

There were more paths west off Sugar Loaf than on the map, and we found ourselves a half mile or so too far north. Passing through a farm, we picked up the river that runs south to Llangenny. Over a bridge in the village was a short climb along a road before finding the footpath north and west towards Crickhowell. We came out onto a lane just before town, where we narrowly avoided being filmed by a couple of people who were recording a local TV news item.

A sister of one of our group has a theory that you will never be disappointed by any pub with well-kept hanging baskets outside. We put this to test by selecting The Beaufort Inn for lunch, right in the middle of Crickhowell. The sun was out and we sat in the beer garden. Sure enough, the sandwiches, chips and beer were all very good.

Crossing the bridge in Crickhowell, apparently the longest stone bridge in Wales, we crossed a field before a short and very steep lane at Dardy allowed us to pick up the Usk Valley Walk. This section passed through part of the Glanusk Estate, specifically the woods where they raise pheasants for shooting …lots and lots and lots and lots of pheasants.

The path dropped back down the hillside a little to pick up the towpath running alongside the Monmouthshire and Brecon Canal, which is cut into the hillside and snakes along the valley. This was the closest point to Llangyndir, so our injured walker left us to pick up his car. The rest of us followed the tow path for quite a long time, certainly long enough for us to begin to want some variety underfoot. That said, it was drizzling by this time and the trees beside the canal kept us dry.

Eventually, we left the canal and the path climbed up through woodland and fields of grumpy cows, before dropping down towards Talybont Reservoir. The last half mile was a bit fiddly, as the path was unclear but we finally reached the YHA.

It was fortunate that we had the extra car, as the food in the YHA was a little uninspiring. We instead drove the two miles north to The White Hart at Talybont-on-Usk for dinner. 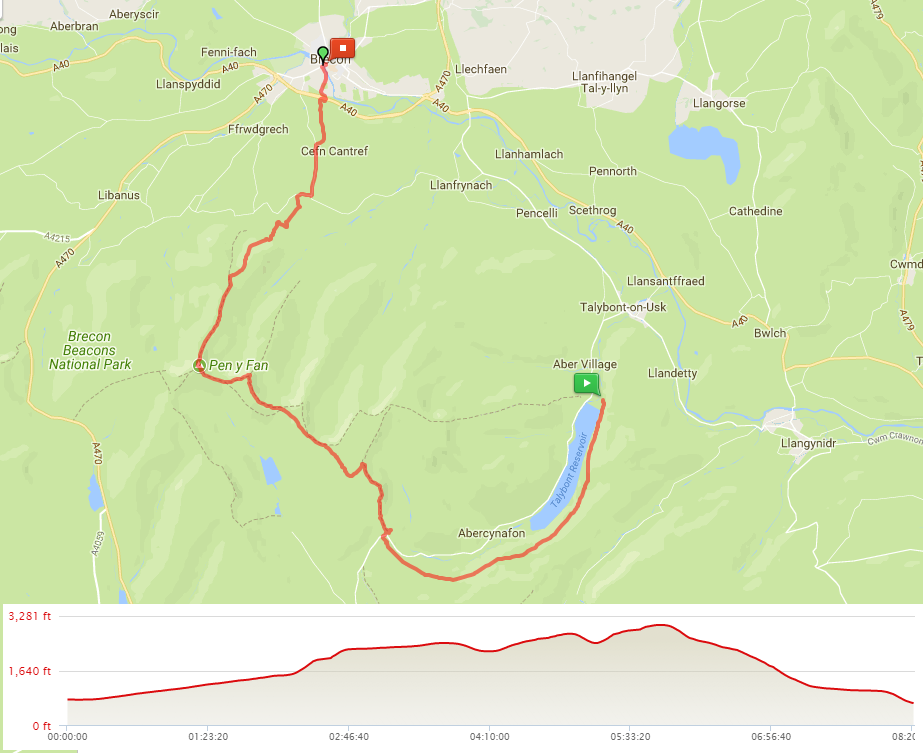 When we originally were looking at a walk in the Brecon Beacons, we were considering walking along the Beacons Way. In the end, we mixed and matched different trails. Saturday’s walk, however, was predominantly along the official route and promised to take us across the best peaks in the area.

In the morning, the weather forecast promised sun by the afternoon but it didn’t look convincing and, as we left the youth hostel, there were clouds on top of the hills. The route started along a disused railway line, parallel to the banks of the reservoir, rising continually to gain height above the water. It eventually reached the head of the valley, but most of the views for first five miles of the day were obstructed by trees and the trail was hard-going on the feet.

We paused at the upper of two car parks on Blaen y Glyn for a drink and a snack. Lots of people were heading out for the climb into the hills and we fell into line. The path from the car park rises very steeply, up rock steps and quickly gains two hundred metres in height. Alas, the cloud was persistent, so the promised views back over the reservoir were somewhat of a white-out. The top of the waterfall, Blaen Caerfanell, was similarly misty so we pressed on, the path almost doubling back on itself to enter peaty moorland, bringing back the horror of June’s slog across Kinder Scout.

By this time, we’d left the other walkers behind (including a cheerful group of lads who seemed happily under-prepared and to whom we wished good luck after letting them take a photo of our map). We followed the vague and slightly boggy path assisted by a compass bearing, turning 90 degrees to the right once we hit a cairn in the middle of the moor.

This route brought us out onto the back of Fan y Big (insert your own smutty joke here). As the visibility was still low and minding that we still had one dodgy foot among us, we decided to drop down the side of the hill. As we did so, the cloud suddenly began to clear and within twenty minutes, the view across the valley opened up. Remarkably, by the time we reached the path that runs from Fan y Big onto the next peak, Cribyn, the sun was out.

The path to Cribyn rises steeply before swinging along a ridge to reach the summit. By this time, the views were picture postcard quality. Incidentally, the official Beacons Way route bizarrely chooses to stay off the peaks and away from the ridge along which they flow. Weird.

From Cribyn, Pen y Fan beckons. The path drops steeply and then rises even more to take you to the top. This is the highest point in the Brecons and was simply beautiful.

An opt-out to allow our lightly-injured walker to save a few miles was for him to go over the last peak in the series, Corn Du, and then drop down to the road at Storey Arms to get a bus into Brecon. The rest of us scrambled down the path north off Pen y Fan to follow the route along the peninsular ridge of Cefn Cwm Llwch (which we did not attempt to pronounce).

After passing the two most clueless mountain bikers in all of Wales and after watching the mountain rescue helicopter hover near Corn Du (hopefully not for our injured walker and presumably piloted by Captain Russell), we dropped down off the end of the ridge, turning right as we reached the valley floor, and then left to pick up a lane towards Brecon. After a mile of road walking, we gratefully turned right onto a path, which itself turned north to take us through two fields of playful but happily timid bullocks and to a bridge over the A40.

Within a few minutes we were at the river at Brecon, where we crossed over via the road bridge and fell into the first pub (my feet were aching) and were joined by our missing walker, who had not had to wait too long for a bus and had already checked us into the B&B. We were staying at The Borderers Guest House, which turned out to be a gem. Really friendly and very comfortable.

Dinner was in the local Nepalese curry house, Ghurkha Corner, where the dumplings (momos) that were recommended to us by Gail at the B&B were rather good. 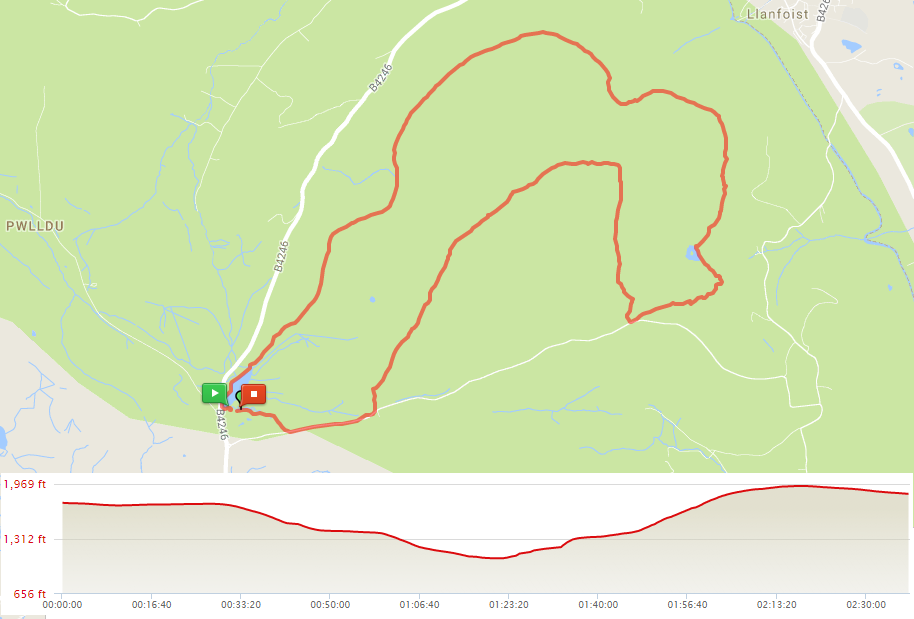 Having decided to look for an easier excursion for the third day, we spotted a book of walks on the bookcase of the dining room at the Borderers Guest House. It suggested a loop around and over the Blorenge, just to the south of Abergavenny, which seemed an amenable length and was in the direction towards home.

The walk started and finished at the car park at Pen-ffordd-goch Pond on the south west side of the mountain. The pond, also known as Keeper’s Pond, was dug in the 19th century to provide water for a forge. When we set off, there were a couple of remote control enthusiasts running their model boats at great speed over the water. When we returned, there was a brave soul swimming in it. Both activities looked a little cold.

The path ran north along the side of the mountain, through seas of fern and cloud. As it started to turn east, it began to drop and we came below the mist to look over Abergavenny and towards Sugar Loaf. A mile or so later, we passed through a gate and into woodland. This took us to a small lake in the area known as the Punch Bowl, once a venue for illegal bare-knuckle boxing but now a rather pretty and secluded spot.

Out the other side of the woods, there was a choice to continue along the side of the mountain directly back to the car park or to turn sharply right to climb to the summit. We took this path, and after a short ascent, turned left on a stony path to reach the cairn on the summit plateau. We were back in cloud at this point so didn’t stop for views and followed the path south west to a car park next to some radio towers. From there, a road took us the last few hundred yards back to Keeper’s Pond and the car to drive home.