The Dales Way - Ribblehead to Bowness-on-Windermere

The Dales Way runs for over 80 miles between Ilkley and Bowness-on-Windermere, across the Yorkshire Dales and into the Lake District. Two years previously, we walked the bottom half, from Ilkley to Ribblehead. The walk was good but, on reflection, we would have liked it to be a little more varied. As a result, when we returned to do the top half, we adjusted the route a little. The main change was to go over Whernside immediately on leaving Ribblehead rather than wend our way around the valley.

With the Saturday walk not planned to pass anywhere where we could have lunch and also being the leg that took in the M6, we were a little dubious whether it would be especially interesting. In the event the whole walk was lovely - going over some wonderfully rolling countryside - and was probably preferred by most of the group when compared to the southern half.

As seems now usual on these weekends, we arrived in time on Thursday to add a circular walk as a warm-up. Given that we chose a circle over Ingleborough, it definitely warmed everyone up. Incidentally, the first time we went to the Dales, we’d gone over Pen-y-ghent meaning that by the end of the weekend we had done the Dales Three Peaks Challenge - albeit in 1,463 days rather than the more traditional 12 hours. 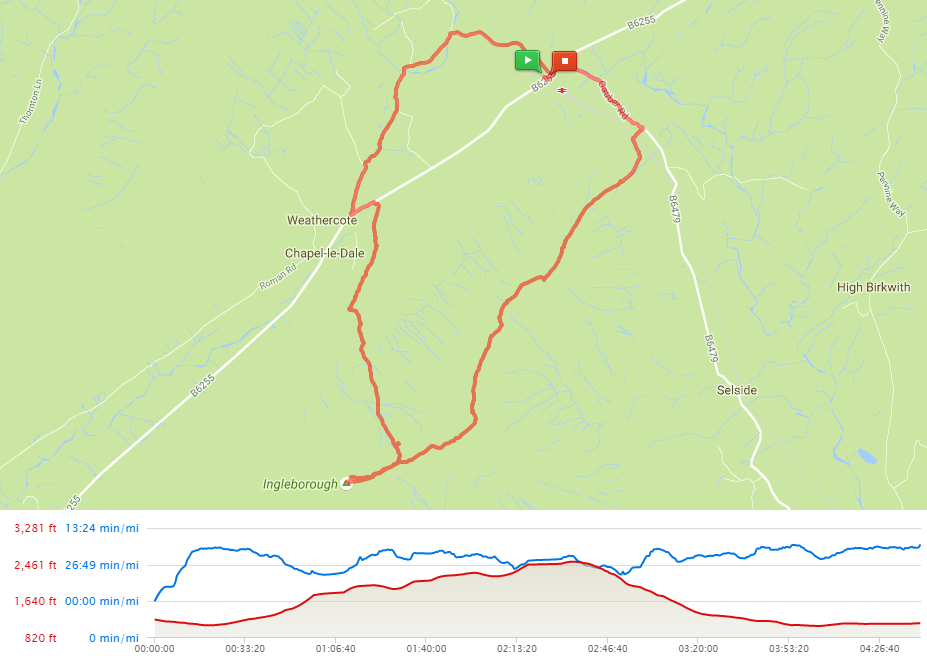 Like Whernside, Ingleborough is somewhat ridge-like. Heading out from the Station Inn, we walked on the road until we were end-on to it. Heading up the path, it climbs steeply until it reaches a lower peak, where the land spreads out. Keeping straight on takes you to where they’ve recently been improving the path given the wear-and-tear from the Three Peak route. Stone stairs here climb steeply to the summit, which is also fairly open and affords great views all around, taking in a vast swathe of the Dales and, to the west, over the Lakes District to the Irish Sea.

The descent goes back down the steps and then sharply and very steeply left, down more steps on the side of the ridge. Once down on the valley floor, the path crosses over to the road (the B6255). When we reached it, we tried to pop into the Old Hill Inn for a swift pint but it wasn’t due to open until 6:30pm. Hiding our disappointment, we headed down the lane opposite to cross over farmland to the Ribblehead Viaduct. The light was beginning to go and the viaduct rather wonderfully gradually changed colour from gold to dark grey. From here, it was only a short stroll back to the pub. 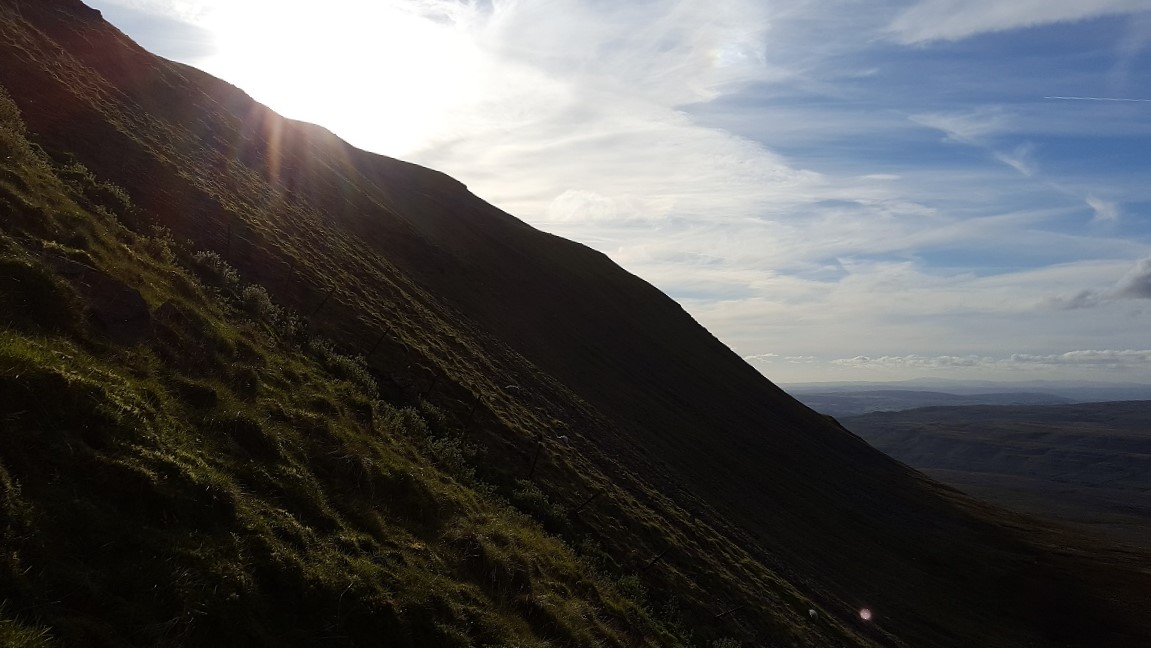 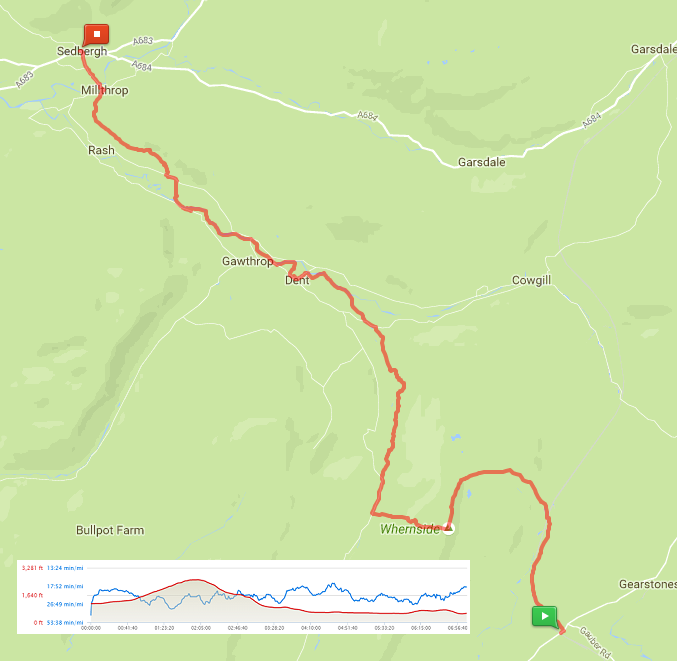 As noted above, we eschewed the official Dales Way route for a few miles in order to go over Whernside. Although there are paths directly up it, they all looked near-vertical towards the top. We instead followed the Three Peaks route, which loops round onto the ridge via a well-maintained and relatively easy path. Although we’d left in sunshine, the summit was in cloud which resolutely refused to lift.

From the summit, the path went straight off the back of the hill - although nowhere near as precipitously as the Ribblehead side. We swiftly dropped down into the valley, turning right on Thornton Lane and then into Dentdale. It was an attractive walk across more farmland into Dent itself, where we stopped for lunch.

From Ribblehead, it was nearly ten miles into Dent. Given that the pubs in Dent stop serving food at 2pm, you have to leave Ribblehead in good time if you want a pub lunch. We got onto the trail about 9am, meaning an arrival in Dent at 1:30pm.

After a relatively-leisurely sandwich, we picked up the River Dee, following it until the last couple of miles, where the route turned north to end up in Sedbergh. The town is a good place for a stopover, with some lively pubs and a pretty reasonable curry house. 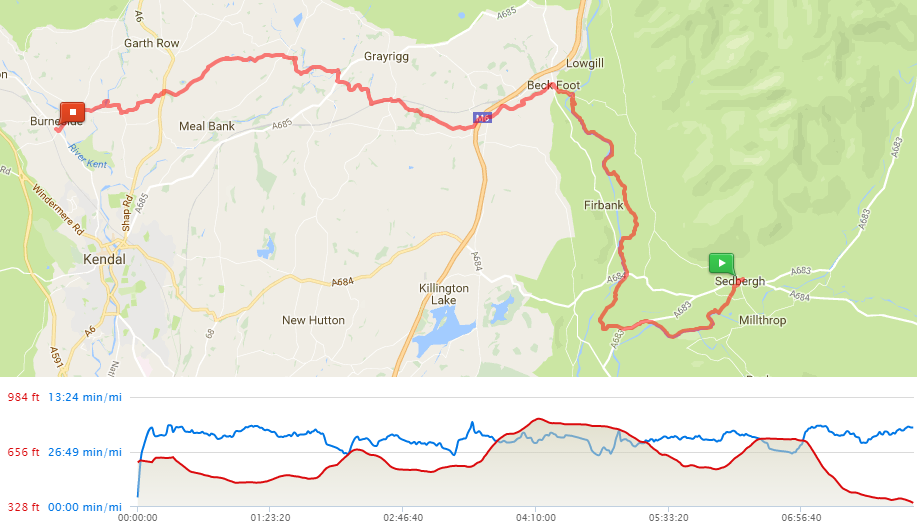 The next stage of the walk had nowhere obvious to stop for lunch, so we bought sandwiches from a small deli on Main Street in Sedbergh. The group then split into two, as some of us wanted to follow the official Dales Way whereas some fancied a climb so headed north instead, into the Howgill Fells (albeit only until the first peak, after which they turned west to meet the rest of us as we came up the official route). As it happened, the hill walkers had an easy time, as it was a good couple of miles shorter.

After we met up, the path ran north for a few miles, along the valley and passing under a ruined railway bridge and then a viaduct, before swinging south-west parallel to the M6. It was then a mile or two before it reached a footbridge over the motorway. Just beforehand, at the track up to a farm, we came upon a couple of benches and a cool box filled with cans of fizzy pop. Gratefully dropping a few pounds into the honesty box, we briefly rested before pushing on westwards.

We waited until we were out of earshot of the M6 before stopping to eat lunch, although it was slightly curtailed due to a near-stampede of inquisitive horses.

The last few miles ran most pleasantly through rolling farmland. We had to take a short detour in order to get into Burneside, as the main road over Spring Bridge was still under repair following the floods caused by Storm Desmond in 2015 (NB it reopened in November 2016).

There’s really only one option for room and food in Burneside. The food was very nice and the rooms very comfortable but the pub’s clientele were a little lively (frequently disappearing en masse into the loos before returning with their energies lifted …of course, we were certain the “no drugs” signs were being obeyed).

We did the final leg in one go, as some of the group wanted to get a 2pm train out of Windermere.

Leaving Burneside after a good breakfast, the route hugged the river for a short while. We then found the path became very similar to the second half of the previous day’s walk; it continued to roll over the hills, but they were beginning to get a little higher, which is not surprising given we were now in the Lake District.

As we approached Bowness, trees closed in around the path, robbing us of any views. The Dales Way then finished very abruptly, as Lake Windermere suddenly appeared through the trees and we stumbled upon the stone bench and plaque that mark the end of the trail.

Feeling pleased with ourselves, we took some photos before sauntering into Bowness for ice cream and to head home. 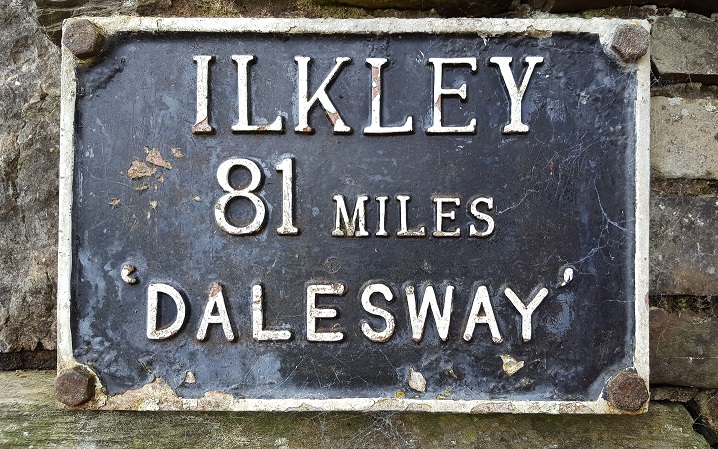