The Yorkshire Dales seem to me to be slightly overlooked area of the country, especially when compared to the Peak District or the Lakes. The few times I’ve been there, I’ve been struck with how wonderful it is. It’s wilder and more remote than the Peaks and quieter than the Lakes.

This route took us from Horton-in-Ribblesdale in the north down to Gargrave, in parts along the Pennine Way. On route, we went over Pen-y-ghent (which still sounds like it should be in Wales), across some beautiful craggy hilltops outside Settle and to Malham Cove - a huge limestone cliff. Some of the walking was very boggy and my boots weren’t quite as waterproof as I’d thought.

To get to and from the walk, we drove to Gargrave, leaving the car at the station, and caught a train to Horton. 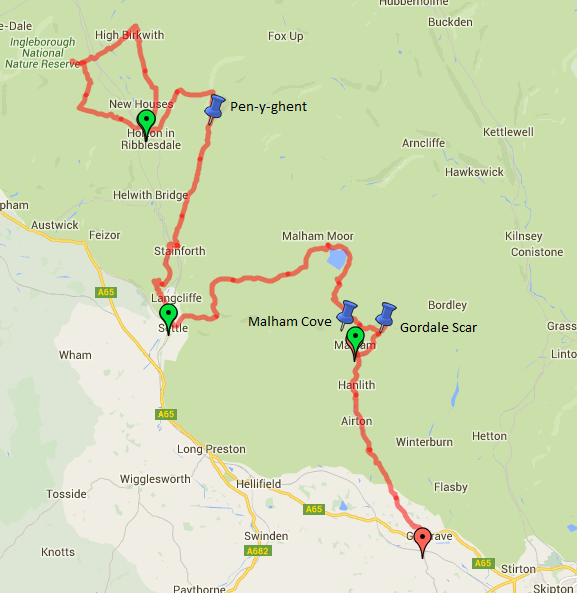 Arriving at lunchtime gave us time for a warm-up walk. We went north along the right-hand side of the valley to the north of Horton before crossing to the other side in order to visit Alum Pot. Truth be told, this was slightly over-sold. We’d expected a dark, rocky hole with water tumbling spectacularly into the depths. For safety reasons, however, you can’t get very close to it and, because it’s really not as large as we’d been led to believe, you can’t really see anything. The walk was nice, though.

Straight out of Horton, we picked up the Pennine Way, up the side of Pen-y-ghent. It’s a relatively stiff climb but not over-taxing. It was a bit drizzly at the top, so we didn’t stay long and headed down the south side, which is an unexpectedly rocky scramble. Leaving the Pennine Way, the path then headed in a mostly straight line, gently downhill for quite a while, all the way to Stainforth.

Lunch was in the marvellously-named Craven Heifer, after which it was a relatively-straightforward riverside hike along the Ribble Way to Settle.

There was a steep climb out of Settle but then we found ourselves in amongst some rocky crags cutting between the hills. It was extremely peaceful and felt very remote only a couple of miles after leaving town. A definite highlight.

The route took us onto moorland with Pen-y-ghent clearly visible to the north, after which we picked up the Pennine Way at the top of Malham Tarn. Having had a somewhat large curry the night before in Settle, none of us were particularly hungry, so we grabbed an ice cream from the van at the car park on the other side of the Tarn and headed down Ing Scar until it came out at the top of Malham Cove.

Having enjoyed the view and being a bit earlier than we had planned, we headed east along the cove to Gordale Scar, where we were astonished to find that the footpath going north actually goes up through the waterfall. Luckily, we were going south…

A short wooded walk later and we were in Malham itself.

Leaving Malham, it was a straightforward walk down to Gargrave, passing through some attractive lowland countryside. 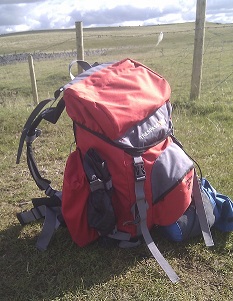